Native Vermonter Caleb Magoon left the Green Mountain State to pursue a career in theater before returning home to open his own sporting good business. He recently expanded his business by opening another store in Waterbury in addition to Power Play Sports in Morrisville. This year he was recognized by the Small Business Administration as Vermont Young Entrepreneur of Year.

Caleb Magoon grew up in Hyde Park. As a kid he participated in all kinds of team sports, as well as other recreational activities like biking, snowboarding, skiing, and hiking. According to Caleb, Hyde Park was a very small non-commercial town which made it an interesting place to grow up.

He says, “Growing up in Hyde Park, there were a lot of boys around my age with older and younger brothers. Since it was such a small town, we all got together to participate in team sports or do other recreational activities together like biking or hiking. It made for a fun and definitely active upbringing!”

Caleb focused on varsity lacrosse at Lamoille Union High School, but says after graduating he found a passion for personal fitness. He started spending more time doing activities like bike racing and backpacking.

Magoon’s mother participated in the outdoorsy life as well. She played softball when she was younger as well as many other team sports. Although when Caleb was around, they often did things like camping, hunting and fishing. “They always encouraged my brother and I to stay active,” says Caleb.

When it came time for Caleb to go to college, like most kids, he felt like he needed to flee the nest and find a school outside of Vermont.

He claims, “I still had many wild oats to sew.”

Young Magoon wanted to pursue his interest in theater design and production. Of course Caleb had his safety school within state limits and close to home, but he felt Vermont just didn’t present enough opportunity to pursue a life in theater after college.

He says, “Ultimately it was about pursuing those opportunities and taking advantage of them.”

So, he decided to attend Boston University for Theatre Design and Production. There he was able to work in well known theaters and create a solid career path in the industry for when he graduated.

Although Caleb worked hard to finally achieve a long sought after career in theater production and design, it wasn’t long before he realized he missed the great green state he grew up in.

After graduating from Boston University, he worked as a freelance designer and producer. The career demanded late nights and long hours during shows. It also required lots of traveling. On the other end of the spectrum, when it wasn’t show time, he worked very minimal hours.

“My life as a freelance designer and producer in theater just wasn’t conducive to a family,” says Magoon. “I missed Vermont’s quiet and leisurely lifestyle.”

So when he was presented with the opportunity to own his own sporting goods store in Morrisville, it seemed like the perfect excuse to return home.

Today, Caleb Magoon owns two sporting goods stores: Power Play Sports in Morrisville and Waterbury Sports in Waterbury. He believes that Vermont could not be a better place to own a sports shop.

Magoon says, “Vermont is unique in the way it values recreation of any kind. Recreation is different for everybody, whether its snowboarding, skiing, hiking, biking, or team sports but it’s a huge part of the Vermont culture.”

This is something he understood growing up in the state and feels happy to be able to keep that active culture alive.

“When I moved to Boston for college and told people that growing up my school used to let students out early to allow kids to head to the mountain to ski and snowboard, they thought I was joking. It’s these kind of actions that encourage this active lifestyle in Vermont.”

This sort of active lifestyle has made Vermont a sought after place for outsiders. Because of this access and exposure, Caleb believes that it has become home to many athletes at the pinnacle of sports. Vermont also has a lot of local pro-athletes that have started in Vermont, made great success, but then return as if they just cannot stay away forever.

He says, “To survive in the retail industry, any retailer must make themselves the cornerstone of the community. You must have knowledge of the products you’re selling and be able to communicate that rather than just pushing the sale of the product – this encourages a personal interaction and hopefully a trustworthy relationship with customers and community members.”

Being a part of a community is extremely important for Caleb. He demonstrates this through his many hours of community involvement – he serves on the board of Morristown’s Downtown Organization; he is the president of the Morrisville Alliance for Culture and Commerce; and he is on the board of the Main Street Alliance of Vermont.

Caleb gives advice for young Vermonter’s looking to maybe live and work in this great state.

Magoon says he feels that you have to figure out what you’re good at and what you’re passionate about. Then, find that crossroad where your strengths and passions meet.

This means knowing yourself – knowing what your good at and what you truly enjoy doing in life.

He says, “I’m good at business and sales. I learned these skills when I was young. I used to help my mom sell blackberries at this little stand near our house. I developed these skills further when I worked at Power Play Sports as a teenager.

”Before switching career paths from theater designer and producer to business owner, I started a non-profit theater company with my friends where I got to put my business skills to use again. I’ve realized there’s many things you can do when you find that intersection of your passion and skills.”

Along with finding that crossroad, Magoon also believes that perseverance is key. He says, “I never see road blocks, only speed bumps!” 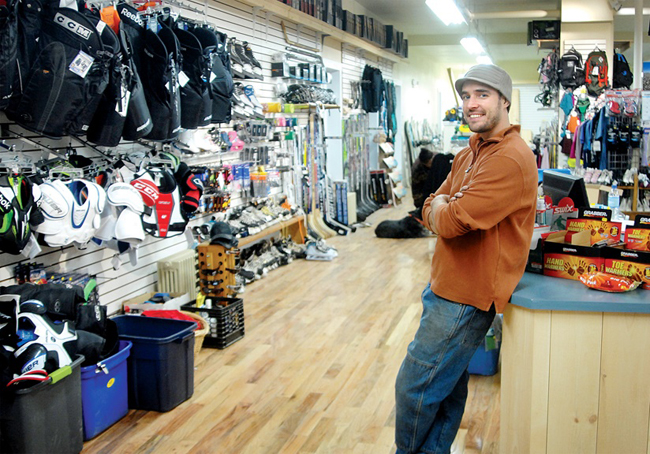