Put away your text books and graph paper-the homework of the future could involve updating your class’s Web page or posting in online forums. Vermont is trying to become the first e-state, which means that cheap cell phone reception and high-speed Internet would be available to every Vermonter by 2010, revolutionizing the way our largely rural state communicates.

Seen any randomly placed antennas or phone towers pop up in neighbor’s front yards or on the side of highways over the past year or so? They are probably part of the e-state initiative launched by Governor Jim Douglas in 2007, which has increased cell phone coverage and high-speed Internet in Vermont from 65 to 87 percent in the last three years.

The improvement in coverage would transform the way that Vermonters –– are spaced far apart through out the state –– talk to one another, do homework and find jobs. Thacher Evans, a sophmore at Harwood Union High School in Duxbury, explained that for him and his friends, increased cell phone and Internet access could be very useful for many different reasons. “A lot of my friends are always on the Internet or [using] their cell phones, and people are becoming more and more dependent on them, so I think lots of people will be excited about the e-state,” he said.

Aside from basic chatting and text messaging, the e-state initiative is also important for emergency situations and public safety. Evans, who says that he is always doing activities outside with his friends, agrees.  “There are some places where I can’t get cell phone reception and it’s definitely dangerous,” he said. “What if you are hiking on some trail far away from anything and you get hurt? Then you’re screwed.”

Governor Douglas says he originally launched the e-state plan because of those reasons, and also because those forms of communication are such a part of everyday life that, “nowadays, people expect it to be available everywhere.” He says that he understands how important the role Internet and cell phones play in the lives of young people, as well as its use as an educational resource.

For example, he explains, increased internet speed and access means that every classroom could start their own wiki-a website linked to wikipedia, where members can log on and update a collection of web pages and message boards. The wikis would allow students to access reading materials and homework assignments online. The next time your parents yell at you for being on AIM, you can just tell them that you’re “doing homework.”

Towns will also be able to create their own blogs where you could read about local events and job opportunities.  In the future, finding a job or submitting your resume could just be a mouse click away.

When it comes down to it though, this new technology is meant to bring Vermonters closer to one another. “We want to ensure that our communities grow closer,” Douglas said. So if you are bored and stuck inside during the cold winter months, separated from the outside world by icy roads and snowdrifts, don’t worry. Soon you will still be able to feel near to your friends, family and neighbors –– and play a few quick games of Snood. 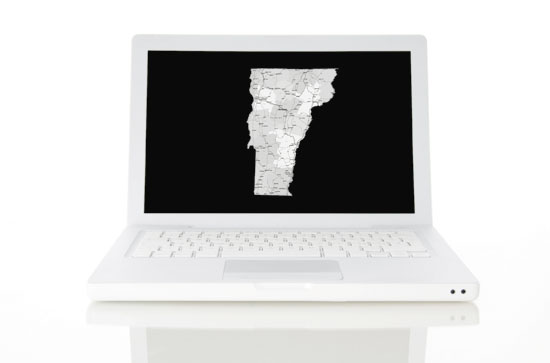