Sometimes you just gotta get away.
A long year of school and homework, parents nagging, job responsibilities –– it can be a lot, sometimes too much, and definitely calls for some well-deserved time off.
Shopping, yeah, that’s something to do, but it’s not always the most wallet-friendly activity. In the winter you could ski, snowboard or sled. In the summer you can hang by the pool. But sometimes, sometimes you just gotta get out –– not just out, but gone, out there, into nature.
Lucky for you, doing this in Vermont is about as easy as breathing. While you could just take a walk around the block or down the road –– if you live in the woods to begin with, you could just stroll through the wilderness from your doorstep –– it’s infinitely more fun and rewarding to go camping (away from mom, dad, the boss and the teachers).
And there’s no better place to start than in one of Vermont’s 50+ state parks, almost all of which come with hiking trails and camping sites readily available (less work for you, which means more time to play).
There is a state park in almost every nook and cranny of Vermont, so you don’t have to travel too far to find one that fits the bill.
Want to boat to an island? Try Knight Island or Woods Island. Want to get a lean-to and relax by a lake? Check out Bomoseen. Want some fast-paced excitement? Jamaica, in late April and September, when they let out the dam, could be up your alley. Want to go for a hike to challenge yourself? Smuggler’s Notch or Underhill can take you to the top of Mt. Mansfield.
To get you started, here are 10 different parks located around the state with plenty of space to camp out and things to do (in alphabetical order):

Alburg (Alburg) –– Cool sand dunes on Lake Champlain make this about the only place of its kind in the whole state. Sand, beaches, sun…it’s not quite Florida but you get the picture.

Bomoseen/Half Moon (Fair Haven/Hubbardton) –– On the coast of one of Vermont’s biggest lakes, there’s enough room to swim for you and all of your friends. Great lean-tos and basketball courts make it a fun place to take a weekend away.

Brighton (Island Pond) –– One of the more out-of-the-way parks in the state, there is plenty of undeveloped woodlands to explore and enjoy.

D.A.R. (Addison) –– Another relaxing spot on Lake Champlain, D.A.R. is notable because it was a major filming site for the movie, “What Lies Beneath,” starring Harrison Ford. How cool would it be to camp out on what was Indiana Jones’ property (if only in a movie).

Jamaica (Jamaica, VT) –– They let the dam out up-river and it’s off to the races in your kayak on the West River, woooo-hoooo!

Knight Island/Woods Island (St. Albans Bay) –– Want remote, like, can’t-drive-to-it-at-all remote? Pretend you’re with Ethan Allen and camp out in the middle of Lake Champlain –– just don’t forget to reserve your space and bring a boat.

Quechee (White River Jct.) –– Set up camp at the base of New England’s Grand Canyon and go exploring along the Ottaquechee River.

Smuggler’s Notch (Stowe) –– Room to stay and places to go make this a great stop.

Underhill (Underhill Ctr.) –– Located on the western slopes of Vermont’s highest peak, Mt. Mansfield, an afternoon hike could lead you to a stunning view.

The Bottom Line:
State Park entrance fee = $3
Tent sites range from $14 to $18 per night
Lean-tos range from $21 to $25 per night
Boat rentals (where available) are per hour/half day/day and can be found at the parks
Reservations can be made online (vtstateparks.com) or over the phone (888-409-7579) or at the park (not guaranteed day-of) 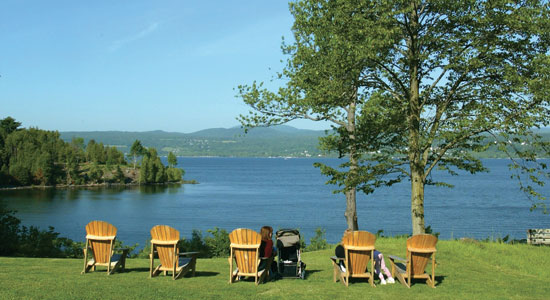