Ben Kaufman, an undergraduate student at Champlain College, has developed an iPod accessory company from scratch. His first product, the Song Sling, a case for the iPod Shuffle with retractable earphones on a lanyard generated $75,000 in sales in its first four weeks. Now, with over 10 products and an awesome website, Mophie is becoming a hugely successful, Burlington based business.
Where are you from?
Long Island, New York
How and why did you start Mophie?
Well, I had another business that was a web design and video production business when I was 14, and I just kinda got bored with that. I was sitting in math class one day, and I had forgotten my headphones with my new iPod Shuffle. I was always a big Mac-head, and kind of wanted to combine the headphones with the iPod in some way. That was the idea for my first product, Song Sling, and after Song Sling was released it just continued from there.
Did you ever see Mophie getting this big, and how big do you eventually want it to get?
I've always wished Mophie would be big, it isn't exactly what I dreamed it to be, yet. I do hope that it will be a very very large endeavor, but as of right now, we're still 3 or 4 people just banging away. But I think we have the potential to be huge.
What made you come to Vermont, and to Champlain College, and run your business up here?
Well I cam to Vermont because I knew that if I didn't want to go to a college that was somewhat different, that I would be sitting in English classes and whatever for the first semester, I wouldn't have my hands dirty in anything I really wanted to be doing, and I would likely drop out pretty quickly. So I wanted to jump right into my major, and they [Champlain] were the only college I found that did that.
At this point, why stay in school?
The fact that I can, that it's possible. If the school is flexible, then you can juggle both. Why not do it, because maybe one day you find that you need it.
What, if any, advantages do you see to having your business in Vermont?
The whole web of people is always nice to talk about. I was dropped into this office space [an office building on Burlington's waterfront] in August of last year, and by the beginning of September, I knew everyone in the building. The landlord was carting me around to all these investor forums, and introducing me to her son who is a lawyer, and now is my lawyer. So it's just a big huge web, and that's what I love about it. Unfortunately, it can come back and haunt you, but you know its cool that its there when you need it.
How may people work here at Mophie?
We have 4 here, and we probably have another 13 people on part time basis. It's all designed right here. Basically, we just send what we want to be made to China, and they send back thousands of them.
A Day in the Life of Ben Kaufman
“True story... I was sitting in International Business, a night class, at 8:30, and my cell phone rings. Its China, I see that its China,... what do you do? Do you pick up the phone and get engaged in international business, or do you sit there and listen to class, to the theoretical proposition that NAFTA was engaged in 19-yada-yada? So obviously, I'm the type of person who picks up the phone.” 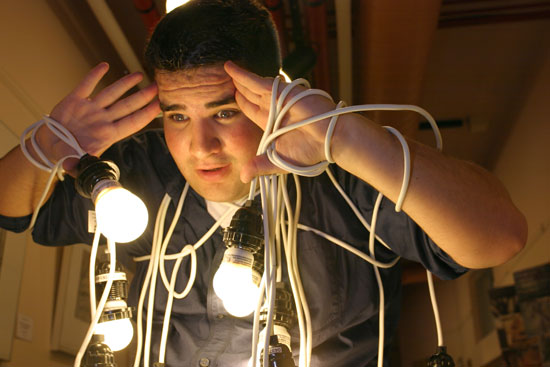