by Casey Hurlburt
Hannah Kearney, from Norwich, Vermont, won the Olympic Gold Medal for Freestyle Skiing in moguls, the first US gold medal for women in that event since 1992.
No one starts out on moguls, when did you realize that was your destiny? When did you realize you wanted to compete in the Olympics?
When I first watched the Olympics on television as a kid, I wanted to be a part of the Games. I began skiing moguls soon after I learned how to ski as a two year old. I always loved the sport, but I didn’t realize I could go places until I made the US Ski Team when I won Junior World Championships in 2002.
What was it like to be in Vancouver representing the US? Can you take us through a typical day at the Olympics on a day you had to ski?
Our event was at night so we usually had a leisurely breakfast cooked by our own chef in the house the Ski Team rented about 20 minutes away from the venue. Our trainer would run us through some morning activities at the gym or in the back yard before we headed up to Cypress Mountain to train on the mogul course. Afterwards, we would return to our residence to eat a late dinner and recover on a spin bike and in a cold tub of water.
What is it like being an Olympic Gold Medalist? Do you feel like a celebrity?
I most certainly do not consider myself a celebrity, but there have been surreal moments when people have recognized me from the exposure I got during the Olympics. I have received letters from people across the globe, including reverends, incarcerated persons, and my past school bus driver.
What opportunities have opened up for you now that you are an Olympic Gold Medalist?
I got to throw out the first pitch at a Red Sox/Yankees game at Fenway Park in April. I’ve also been invited to speak at different schools and gatherings to share my stories.
When you were welcomed home by elementary school kids in Norwich, VT, VPR quoted you saying, "[T]his is the best place in the world to grow up." What makes Vermont the best place in the world to grow up?
The support and opportunities in Vermont are unbeatable, making it the perfect place for a kid to thrive and reach their full potential. Plus, the mixed weather conditions build character.
How did it feel to be welcomed home by all of those elementary school children who were let out early just so they could welcome you?
Before the Olympics, my old elementary school sent me off to Vancouver with songs and cheers. Being welcomed back with my gold medal the day I flew home from the Olympics was a perfect ending to a storybook two weeks. I was surprised and touched by the turnout.
What are you doing for the summer?
I moved to Steamboat, Colorado, for the summer to continue my trampoline and water ramp training around some new scenery. I bought a new mountain bike to enhance my training. I coached at a ski camp in British Columbia for 10 days in July and attended ESPN’s ESPY awards in LA on July 14th. I trained at a US Ski Team camp in Australia in August and returned to Lake Placid, NY’s Olympic Training Center in September.
You were a multi-sport athlete in high school, how were you able to do all that, be a student, and still have a life?
I did not have much of a life! I spent all of my free periods in the back of the library getting my homework done so that I could put my energy into soccer and track practice after school or get ahead on my work to make up for the classes I missed for ski competitions.
What advice do you have for high school students, and in particular those who wish to pursue sports at a high level (college, pro)?
I would recommend taking advantage of every opportunity that presents itself, but keeping a balanced lifestyle to maintain happiness and not burn out.
What are some of the most-played songs on your iPod?
Recently I have been downloading a variety of NPR podcasts to listen to while I drive or run. My gym music consists of top 40 songs and some Queen, Tom Petty, and Van Morrison.
What is your favorite movie or book?
I love Roots, Pillars of the Earth, The Time Travelers’ Wife, and Harry Potter 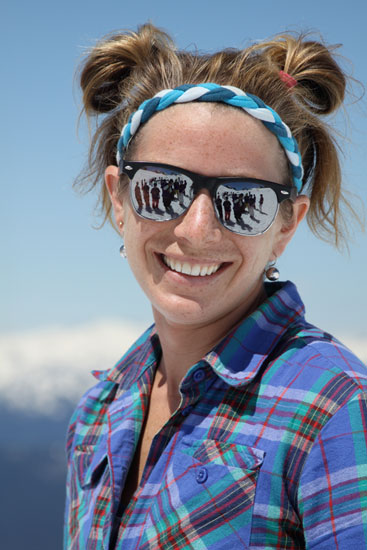