Stuck in the middle, Central Vermont is sandwiched between Lake Champlain and the Connecticut River but it’s certainly not closed off. It’s in the middle of it all.
With the smallest city in the United States (Vergennes), the only state capital without a McDonald’s (Montpelier) and one of the prettiest stretches of road in the country (Route 100), Central Vermont is just about the heart of it all. Whether you’re in the Champlain Valley, smack in the Green Mountains or in the Connecticut River Valley you’re bound to find something new and different.
If it’s skiing at Sugarbush, tubing in the White River, taking a picnic along the Connecticut River, cruising in a boat on Lake Champlain, making a visit to the state Capitol, or catching some of the Barre Auditorium’s March Madness that you’re looking for, you’re going to be spending your time wisely –– and having fun.
Middlebury
There’s a picturesque college, an interesting downtown, a river that runs north and an A&W? Yep, that’s Middlebury in a nutshell.
If you’re looking for food: Eat Good Food is a café/deli with an inventive, worldly menu; American Flatbread has tasty, all natural pizza cooked in a wood-fired oven; the Otter Creek Bakery has great, quality sandwiches, baked goods and desserts at good prices
Getting there: Middlebury sits at the junction of Route 7, Route 30 and Route 125 in Addison County. Rutland is about 30 minutes south on Route 30, Burlington is approximately 45 minutes north on Route 7 and Castleton is also 30 minutes south on Route 30.
Barre/Montpelier
Whether talking about sports or politics, you could say the combination of Barre and Montpelier is the capital of it all.
Montpelier has the gold-domed Capitol (which is a worthwhile place to take tour), but also has a downtown that feels like a slice of Europe, littered with bookshops, coffee shops and places to eat.
Barre is one of the two homes of Vermont’s only professional basketball team –– Burlington is the other ––the Vermont Frost Heaves, who won the American Basketball Association championship in 2007, their first year of existence! While they have games all winter at the Barre Auditorium –– which USAToday named one of the 10 best high school gyms in the country –– in March you can check out the excitement of the boys and girls basketball playoffs.
For a place to eat a homey, creative meal, try the Farmers Diner in Barre (all locally produced food!), or for a place to take a date, try Sarducci’s in Montpelier.
Getting there: Interstate 89 runs through Barre and Montpelier –– Burlington is 45 minutes to the west –– with a few exits so make sure you pick the right one! Route 2 and Route 12 also go through Montpelier, which is connected to Barre by Route 302.
Vergennes
It’s the smallest city in Vermont and also the entire United States which means that, at the very least, you’ve got to check it out if only to see what America’s smallest city looks like. Once there, there is certainly enough to keep your attention…
With a downtown that’s prime for a postcard, built atop a hill and around a common town square, Vergennes really does look like a small city. Niche shops and restaurants sit shoulder-to-shoulder along Main Street and the green and give the town a timeless feel.
If a splash of nature is what peaks your interest, Vergennes, like Middlebury, is dissected by the Otter Creek. The town’s dock, located at the bottom of the hill, below the waterfalls, provides a spectacular view of the falls themselves, the area around them and, really, just a great place to get away from it all.
Getting there: Vergennes is located between Middlebury and Burlington on Route7, and sits at the junction of Routes 22A and 7 as you come north of Fair Haven. 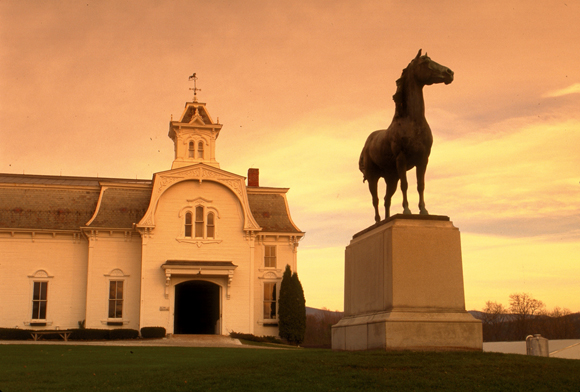