Catch Me If You Can: Burnham and their race to the top

Forrest, Andre, and Alex Burnham may seem like typical teenagers. They enjoy golf, hockey, and even extreme croquet, a sport invented in their own backyard. But unlike typical teenagers, the Burnham brothers are on top of the world, quickly making their mark on the nation’s music scene. Starting out by playing in their living room in Arlington, Forrest (14), Andre (16), and Alex (18) put their heads together to form a band known simply by their surname: Burnham. Little did they know that their talent, hard work, and passion would lead them to unimaginable places in the matter of a few short years.
From a record deal with Island/DefJam to opening on Justin Bieber’s world tour, Burnham have achieved what many artists can only dream of. They have made a name for themselves with their hit singles “Catch Me If You Can” and “Don’t Be Shy,” having chartered on billboards around the country.  Highly gifted and talented, the boys are now ready to take their music to the next level. The musical world is at their fingertips and one step at a time they will continue to do what they love, while never forgetting their roots in Vermont.

What was your favorite part of being on tour?
(Forrest) Being on stage was the best part. Catering took a very close second. Montreal at the Bell Centre was also fantastic. The crowd was crazy. We use inner monitors and earplugs when we play. But still I felt like covering my ears with all that screaming.
(Andre) One of my favorite parts was before and after each show we’d have a meet and greet with all of the VIP fans. When we got on stage, they went to the front and it was great being able to connect with them during shows. My favorite arena to play in was the Boston Garden. I watch all of the hockey games there from my couch and I was thinking, “Oh yeah, I know this place.”
(Alex) My favorite thing had to be the whole family vibe of the crew backstage. Hanging out, jamming with guitars, and talking to other artists who had been on other shows. It was really cool meeting everybody. Also getting a tour of the Bruins and Celtics locker room was really cool.
With the tour and label deal, the band was now a part of a global music phenomenon. But Burnham is always thankful of their roots growing up in Arlington, Vermont. They appreciate all of the opportunities Vermont has to offer aspiring musicians, even at a small scale. They say it’s an attribute to the state’s talent and passion for music.
(Alex) We played so many shows locally. When the school ensemble closed down, our dad was able to talk to Orvis and did some Orvis tent sales. At that point, anywhere we could play we were happy. We’ve even played two gigs in a day. So the fan base started in Vermont. Now when we look at our Twitter we see people from all over the world.
(Andre) We played in mostly Southern Vermont. We did a battle of the bands in Arlington High School one year, which we won. That was held by EQX, the local radio station out of Manchester.
(Forrest) And that’s how we got the LarkFEST show.
(Alex) EQX was just an amazing help. They played our songs really early on, which was amazing. The first time we heard our song “Goddess” on the radio was on EQX. And our first radio interview was EQX. It was really something.
(Andre) That’s what’s cool. People sometimes say, “Oh, there’s nothing in Vermont.” But I just think there’s so much in Vermont. There is so much young talent and great ideas that come from Vermont and they’re just building right now and they are going to explode.
(Forrest) Already, there’s some amazing stuff coming out from here, like maple syrup. It’s proven that Vermont makes the best. And let’s not even talk about Ben and Jerry’s.

What methods do you use for songwriting?
(Andre) We all contribute a lot. There’s not one specific writer. We also do a lot of collaborations, like on our EP. “Catch Me If You Can” and “Don’t Be Shy” were both collaborations with other writers.
(Andre) Probably the most collaborations we’ve done were with these producers in New York called Espionage. They actually wrote “Soul Sister” with Pat Monahan from Train. On the EP “Don’t Be Shy” when you hear the Ukulele, that was actually the same Ukulele that was in Soul Sister.
(Forrest) We saw the Ukulele and we knew right away we had to seriously write a song with it.
(Alex) But overall, there’s always that right balance where you’re throwing things off of another person, and they’re throwing stuff back. And you get the perfect song. That’s what a musician lives for.
The band continues to write songs in the hopes of soon creating a studio album. Outside of recording, the band is on tour around the country. The tour stops at 25 venues all over the US. Concerts close to Vermont include Montreal, Boston, Pennsylvania, and New York. They hope Vermonters will come out and support them during their tour, just as they encourage aspiring musicians to keep at their dreams and aspirations.
(Andre) I would say that for us, we always loved playing music so we didn’t even think about it being a career like it’s turning out to be. If you love doing it and if it makes you happy, nothing bad comes from it. Never be discouraged either. There were a lot of times in our early years when we questioned what we were doing. But just keep going and pushing through and it always turns out great.
(Forrest) Always have fun. If you’re not having fun, there’s no point in doing it. Really music is all about the feeling and the passion. It’s the universal language. You need to put 100 percent into it.
(Alex) There are times in this business where you can fall into the same routine, sleeping in the same room, eating Subway everyday, waiting for that break. But when it happens, it’s all worth it. You push through and that’s what it’s all about. 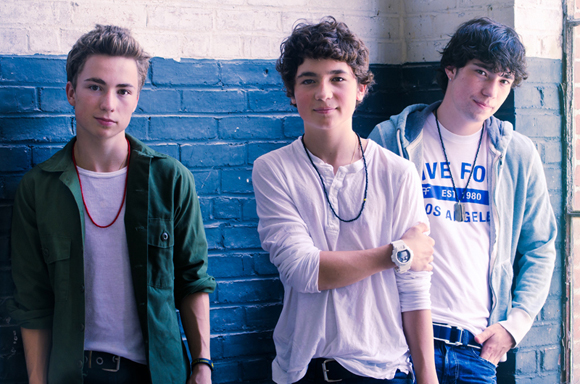